As stated in a previous article, one of the goals we are focusing on right now is deploying to pre-production every 45 minutes. At first blush, that seems a bit fast. When I broached it with my team they (rightfully) pointed our current CI build takes 15 minutes to build, deploy to development, run automated tests, and then deploy to testing. Excellent point.

It got me thinking, what exactly are we building on every check-in? If a component didn't change why go through the exercise of rebuilding it and redeploying it? Could the current build be broken apart into smaller builds and only build when that component changes? Could that provide enough of a speed boost to get to production faster?

After some research we decided to do just that, break up the main CI build into smaller builds. Each focused on building a specific component of the application. We didn't just do it willy-nilly, we tried some configurations, saw how it went for a few days and adjusted. This article will hopefully show you the thought process for each decision so hopefully, you can apply a similar idea yourself.

First up I wanted to examine what the build is currently doing. But to do that it is important to know the architecture of the system my team and I are working on. The architecture follows a standard N-Tier Architecture Model, with the User Interfaces communicating with the business logic via RESTful services.

All of the source code was housed in a single folder called "source" (I am not very imaginative). At a high level, the project structure was

All the projects, including their respective test projects, were housed inside a single solution.

When the code was checked into master the VSTS build would take over, build the solution, package and create releases for each six Octopus Deploy projects. Each build would run all the unit tests, both C# and JavaScript, as well as the full suite of service integration tests using Fitnesse. It is no surprise it took 15 minutes to build all that, deploy, and test it.

With all that in mind, I took at look at the change log for the past several weeks. It was rather interesting.

Time Spent on Each Component

Looking through the logs it is easy to see how much each component takes in the build process (this includes building and deploying).

As stated before, we are using VSTS as the build tool. One of the newer features added in the past six months or so is the ability to set the trigger on a CI build to only fire when a file in a certain folder is changed. 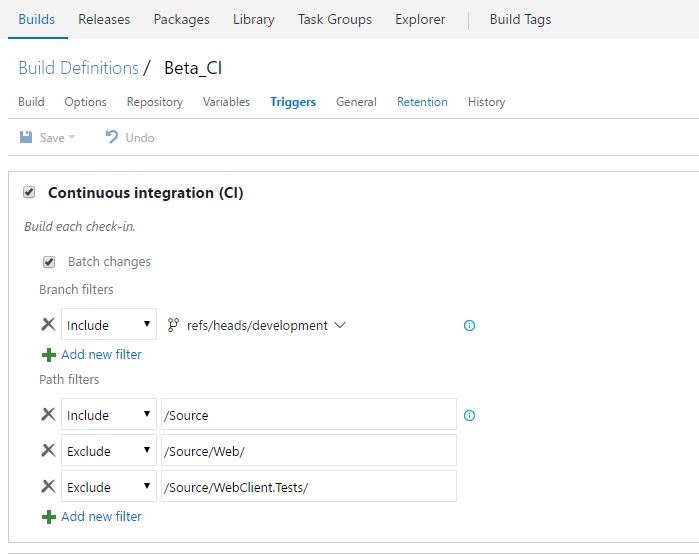 Knowing that certain components rarely changed, it made more sense to break those out into their own solutions. To keep things separated (and hopefully less confusing), those pieces would be moved into a new folder called "Components" and each component would have its own solution file.

Instead of having one main CI build I ended up with three after this exercise.

Building Fitnesse tests take time. I'm not going to go into the ins and outs of Fitnesse, but know that it took the time to do it but there wasn't a lot of churn. Looking at the logs I knew it would take around 120 seconds to build and deploy fitnesse.

But it would take over 3 minutes to get to that point in the main CI build because of all the steps required. 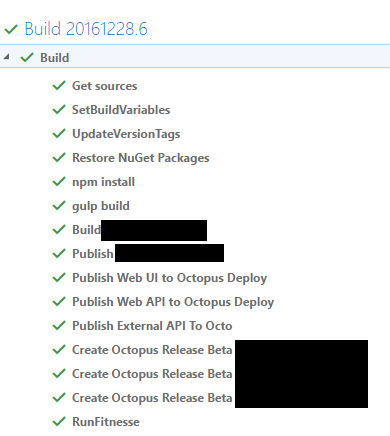 That enabled me to also to get that chunk of work out of the Main_CI build. After this step, I now had four builds.

Our CI build runs Fitnesse tests as a service integration test in the development environment. If everything passes then it automatically promotes the project up to the test environment where QA and Business people can test the changes. One year ago, in December of 2015, we had no Fitnesse tests. At the time of this writing that has grown to over 300 unique tests and 15,000+ assertions. The runtime for all these tests has increased to 5 minutes, or about 1 test a second. Each test is responsible for setting up and tearing down the data needed for the test. This ensures we get consistent results.

The point of these tests is to ensure we didn't check-in something that will stop testers from testing. We really didn't need to run the full suite to determine that. We selected 40 or so tests we consider good smoke tests to run as part of the CI build. We then set up a scheduled build that will run all tests every two hours.

These changes have gotten the build time down from 15 minutes to 7 minutes. That might not seem like a whole lot, but consider this, the most builds we could do in an hour was 4. That has now been doubled to 8. We have also managed to ensure quality is maintained. We can respond to issues quicker.

We have also reduced the amount of items needing to be deployed to production. If something didn't change, don't deploy it. Before these changes were made we would have to look through the changelog. And we were afraid of missing something so we just decided to deploy the whole stack. Now we can see in Octopus Deploy's dashboard certain components haven't changed since the last deployment, no need to deploy them again.

It is not all rainbows and sunshine.

I got a little to separation happy and broke the UI and Database out from the main CI build. That made things very confusing for other people on my team. They were used to the full stack being built and deployed. I think of it like normalizing the database. I went all the way to 4th normal form when I should've stopped at 1st or 2nd.

Also, all the components in our application share a core library consisting of DTOs and logic for configuration, logging and connecting to other RESTful services. At the time of this writing, each component's solution references that core library which is currently stored in the "Source" folder. I'm still working through options to decouple the components from one another. But it is something to keep in mind if you go this route.

Overall, people on my team are happy this change was made. They can get bug fixes and new features up to the business to look so we can get faster feedback. I only wish I knew about VSTS's include folder in their trigger a lot sooner so this could have been implemented when we were in a time crunch.

If you do decide to do this I recommend discussing it with your team so they are aware of changes to the build process. It is very confusing and frustrating to have something you thought would build not build, or have the appearance of not building. The easiest way to get a win is to find a component that rarely changes and move it out of the main solution. That gave me the freedom to experiment and learn what needs to change in our architecture in a low-risk part of the code. If anything went south it was easy for me to roll back my changes.

This was just my first step making our builds smaller. My next goal is to start slicing up the application into smaller pieces. Doing that will take collaboration between the business, operations (so they know what is about to happen), and QA to ensure I don't mess something up. As I am able to do that, I will provide further updates on this topic.