Over the Christmas holiday, I had some time off. At first, I thought I might be able to get some bike rides in. At the beginning of the month, the temperature averaged around 45 degrees Fahrenheit. If the sun is out and there is no wind I can easily get an hour ride in. That, that plan quickly fell through.

All the family get-togethers were over, so what to do? How about a home office upgrade? Finally, take the time to fix all the annoyances I had with my home office. The list was rather long.

Out of everything I did with my time off, this was by far the easiest. I had some old plastic shelving I from my garage that was no longer being used. It just needed to be cleaned (so many dead bugs and dust). After going through several wipes I was ready to start moving over everything. But that did involve unplugging everything. Which meant no internet for anybody in the house while I was screwing around with it. I did the smart thing and waited until my wife left for a couple hours to run errands then got to work moving everything over. Moving everything from the old shelving unit to the new unit proved to be more work than I thought. I wanted to put all the tech on the top shelf (wireless router, modem, printer, external hard drives, etc). But the UPS is rather heavy so I wanted it on the bottom shelf. The power cords didn't stretch all the way to the top shelf. So I ended up with a few items on random shelves with the router and printer on the top shelf. 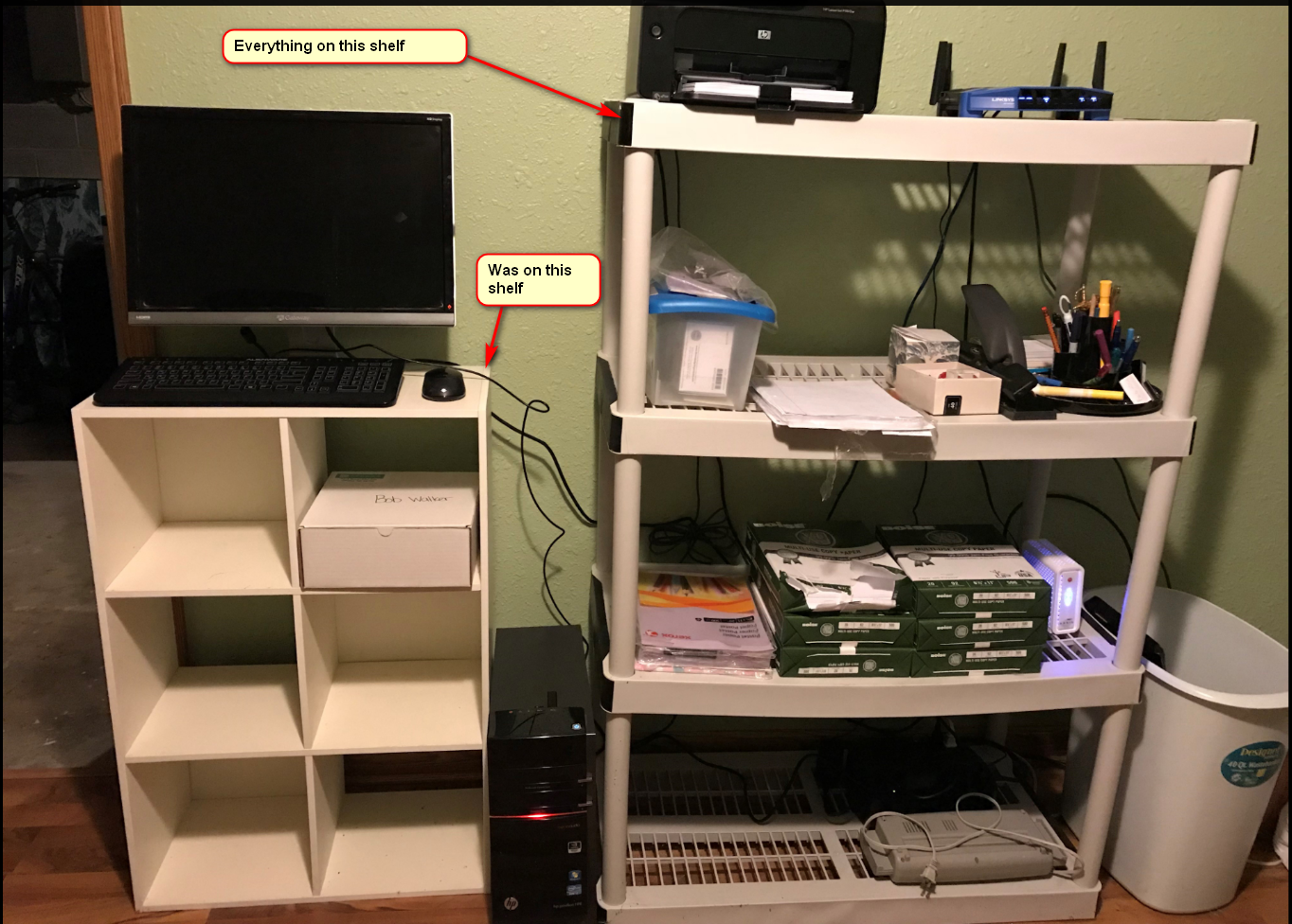 Pro Tip: Label the various plugs before unplugging everything. The router, modem, and external hard drive all required non-standard plugs and for fun the manufacturers don't label them. In my rush to get everything done I unplugged everything without labeling anything. I spent way too long trying to figure out which plug went with which device. I really like the black on black text on some of them.

Setting up the home server ended up solving multiple problems in one go. Getting it setup...well that was another set of issues entirely.

Side Note: I know what some of you are thinking, why didn't you just host this in Azure. Well, for all the various uses I planned on doing I knew I would require at least a D2 v2, which runs about $194 a month, or $2,328 a year. For a home office that is a bit steep. Plus, I wouldn't be able to use it as a file server as easily.

Back in 2013, I purchased a Mac Mini with the thought it could be a server for all the Macs in the house (at the time both my wife and I were using Macs). It could be our time machine server, a print server, well basically everything I was trying to do now. The problem was the damn thing kept either crashing and losing the printer. My plan was to resurrect that idea, but use Bootcamp and install Windows on it. In addition to being a print and file server, the applications I am going to run on it are:

Those, those are laptop parts. In this day and age, a low-end laptop. Those builds are going to take a while. I couldn't do anything about the processor, but that machine maxes out at 16 GB of RAM. And I could throw a small SSD (240 GB) in there and use that as the main drive.

Using iFixit's guide, upgrading the ram went as smooth as it could have possibly gone. Next was upgrading the hard drive to an SSD. I found another guide on iFixit to upgrade the hard drive. All the comments I read said I didn't even have to remove the logic board. Great. I got to work. Everything was going great until I removed the antenna plate. The Mac Mini Late 2012 models support dual hard drives. When Apple assembled my Mac Mini they put my hard drive in the bottom slot. Not the top slot like the guide said. 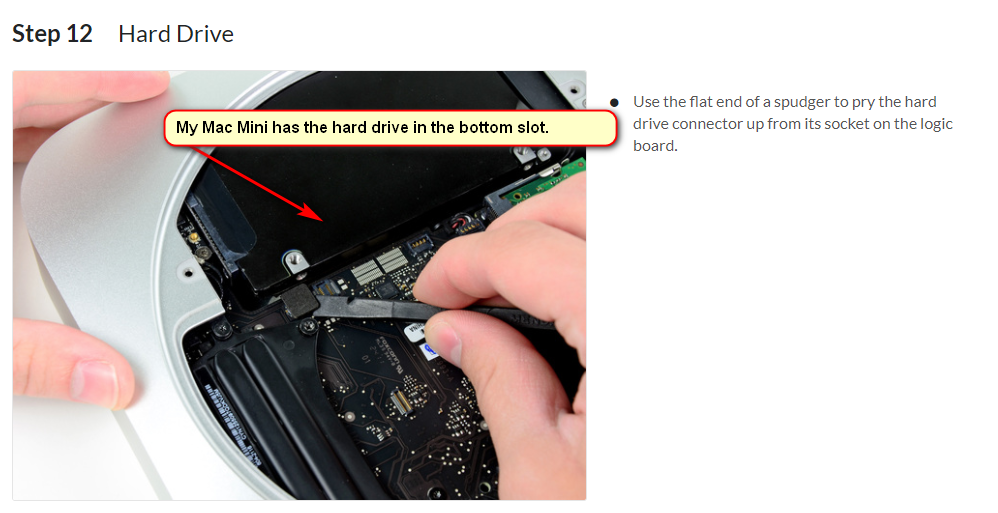 This meant a complete disassembly of the Mac Mini. No, forget that. I was already dealing with tiny pieces. I know I am going to mess everything up if I went down that road. After I put the Mac Mini back together I went back to the basement to find an external hard drive. I damn near tripped over my old Windows tower I got back in 2011. I forgot I had that still in the house. It hadn't been turned on in over four years. I found the model number on the side and did a quick Google search for the specs.

Aside from the RAM, the HP was much more powerful than the Mac Mini. Which is to be expected, the HP was built using desktop parts, not laptop parts. I know clock speeds don't make or break a system, but this was a significant difference.

I did not trust the hard drive in there, at all, it is over 7 years old at this point. But the HP supports 6 Gbps SATA, so a quick trip to Best Buy to get a 3 TB WD Blue internal drive and a 2.5-inch to 3.5-inch adapter to install the SSD and I was in business. I created a bootable thumb drive to install Windows 10 onto the SSD.

Because the tower lacked a wi-fi adapter I decided to keep it down in the basement so I could connect it directly to the router. From a network speed standpoint, this seems to work the best for me. Going from Wifi device to Wifi device is a lot slower than Wifi to an ethernet device. This is not a super big deal because I was planning on RDPing into it anyway.

The HP tower freaks the hell out when it doesn't have a monitor, keyboard, and mouse attached to it so I put all of that on the old white shelf everything used to be on. 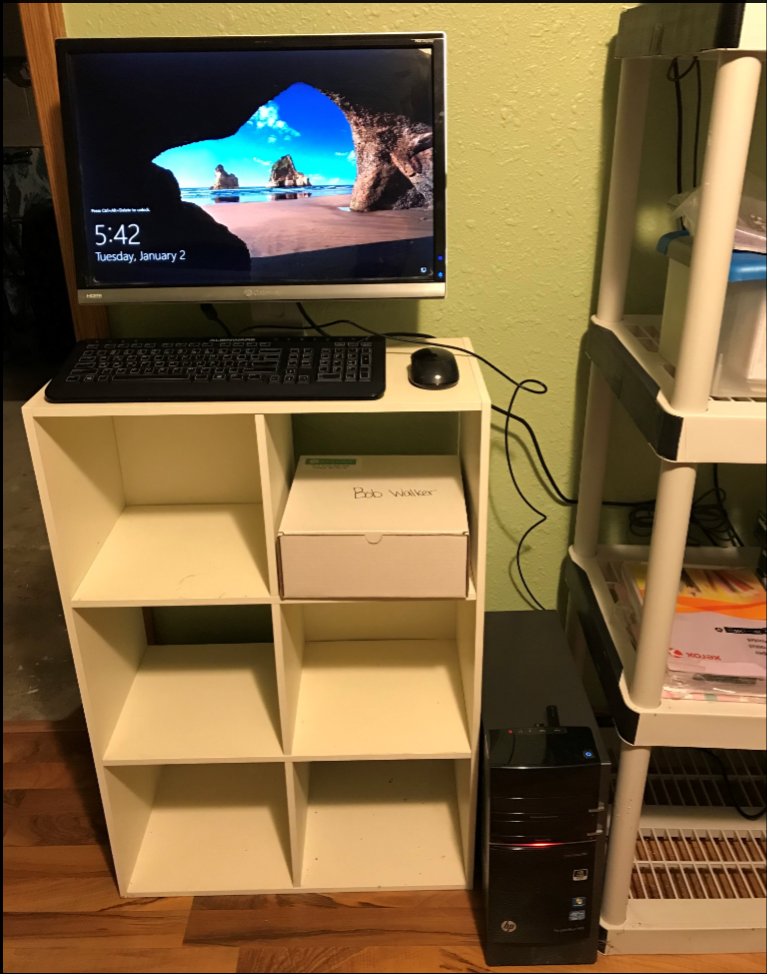 I don't want to think about file backups, I want it to just work. The network attached storage solution being used sucked. The Time Capsule / Time Machine for my wife's Mac would work when it felt like it. The USB 3.0 Hard Drive attached to the router was slow and made backing up my computer a real chore. I wanted to have a couple of backup plans in place.

The server I just assembled had two new hard drives installed, an SSD and a mechanical 3 TB hard drive. With the amount of horsepower the tower has, it should be able to handle some file transfers over its gigabit ethernet connection.

After some research, I decided to go with a 3-computer subscription Acronis True Image 2018. It allowed me to create multiple backup plans for my computer in my office, and it supports both Macs and Windows. Even better, the Mac backup could be an SMB share on the server.

Update Printing Solution So All Computers Can Print

My thought here was go big or go home. Most of the computers in the house supported the 802.11ac protocol, the router I had didn't support it. I found a great deal on an Linksys WRT3200ACM in town so I pulled the trigger. My home office is three floors away from the router and I am getting a 1.3 Gbps signal. 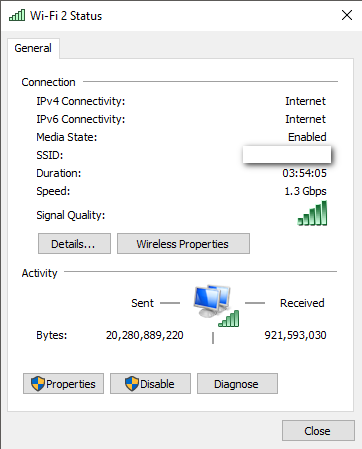 I have been wanting an adjustable desk at home for quite some time. When I am working on a post or editing pictures I get the urge to stand up. Not being able to do that has been a real pain. However, I wasn't planning on doing this for a while. I was going to keep an eye on deals on the internet and pick one up when the time was right. It turned out the best time was right after Christmas. Office Depot was offering an Magellan Performance electric adjustable desk for $100 off. I ordered it online and I was very surprised when it was delivered the next day. Where was the warehouse? Lincoln?

It took about an hour to finish. Well, it would have if I didn't turn on Rogue One in the background. Everytime something cool happened I would stop to watch. Hey, it is my vacation!

One thing I really liked was the included cable management hooks. I could run the wiring up behind the legs instead of having everything dangle down from the desk. 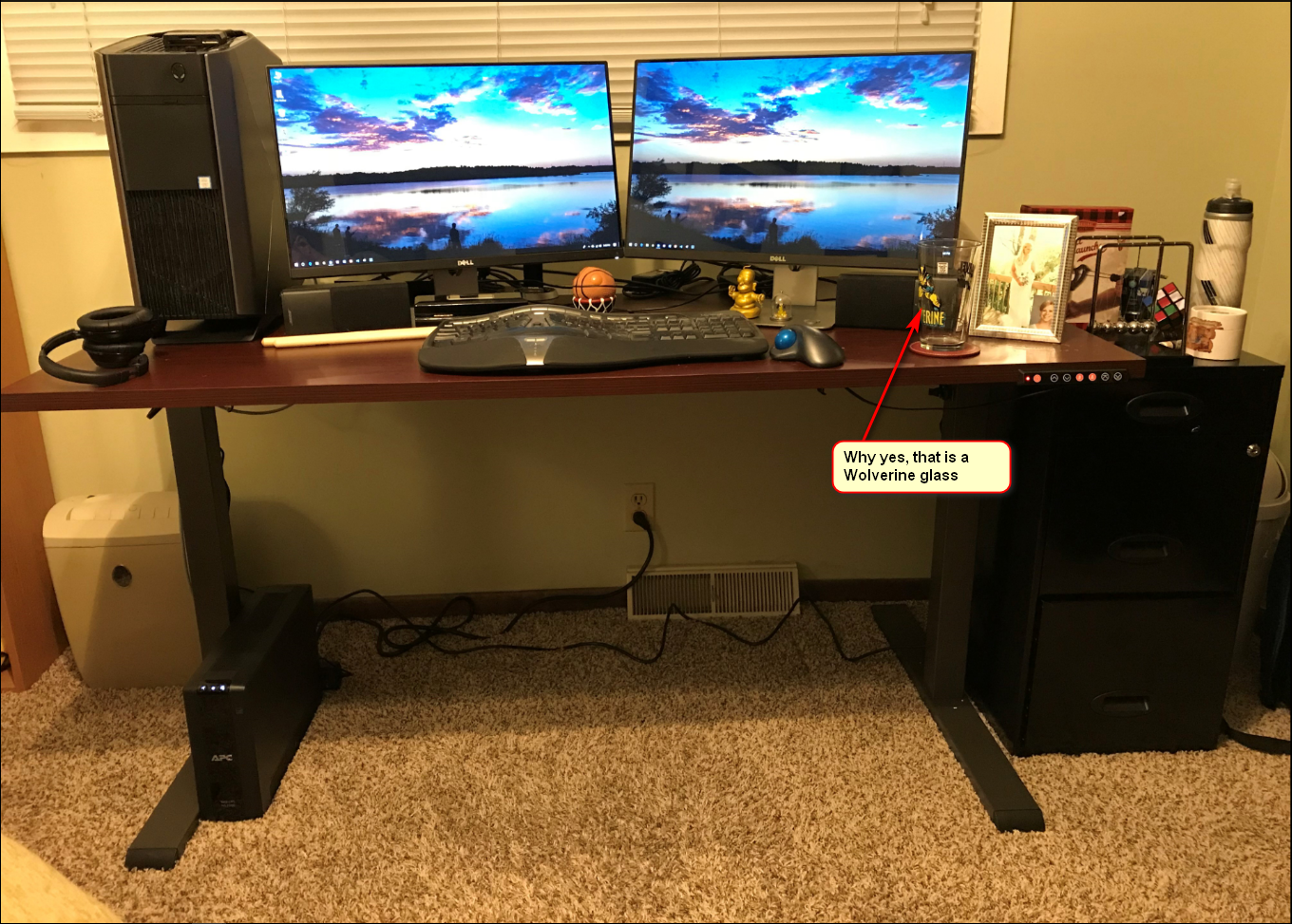 Of course I get everything just how I wanted it and the UPS attached to my computer upstairs craps out on me so I got to replace that today. Thank goodness for the post-Christmas / New Year's sales going on.

I've learned through this process that a home office is never complete. There is always something to work on. Hindsight being what it was, I should've tackled some of these issues sooner rather than waiting and trying to do them all at once.