It seems no matter where you work as a developer, the first day or two is all about setting up the company issued laptop with the necessary tools to do the job. Everyone recognizes how much pain in the ass that is, and how much time is wasted doing it. The most typical solution to the problem is "we should make a developer image."

The Problem With Developer Images

The idea of an image is fantastic for most of the employees at any corporation. It guarantees a set configuration. Applications, even internal websites, are tested against that configuration. If those applications happen to work on other browsers or another version of office, great. However, developers cannot have a set image. The tooling is changing so fast. Hell, Visual Studio 2017 keeps asking me to update it every two weeks.

This leads the fundamental flaw in the developer images. It only works as long as you keep it up to date. But that almost never happens. The people creating the image are typically from the operations group, which is completely different than the people using the image, the developers. A new version of Visual Studio is released. Is the image updated? No. Or the latest version of .NET is released. Or the shop decides to switch over to Docker, but the image didn't have Hyper-V installed to support that. So what ends up happening? A machine is imaged for a developer, but this time they are given obsolete tools or a misconfigured machine. The developer, or the person performing the setup, have to figure out which tools to uninstall, or which configurations need to be updated. A step-by-step guide is created to get developers from the base image to a properly configured machine.

The Problem With Step-By-Step Guides

Most developers I've seen try to use an image get fed up with the whole thing and just say, give me a barebones Windows 10 with Office installed; I'll take of the rest. To help make sure they don't miss anything they create a checklist or a step-by-step guide to getting a developer machine setup. This solves the major problem with the image because the developer has to download the latest version of the tooling. But it is a checklist, it requires manual work. Some step will be missed. A tool isn't downloaded or a configuration is missed. For example, when IIS was installed, the developer forgot to include the Windows Authentication module.

The Problem With Virtual Machines

So this is where I was a couple of weeks ago. Two developers were getting new Windows 10 machines. Best case scenario, they would be up and running after 8 hours. But that is only if they baby-sat each installer and their meetings that day were few and far between.

This was what each developer had to do:

My first inclination was to use Docker for all of this. I soon discovered I had some fundamental misunderstandings about what Docker Provides. Docker is for tools which provide some network interfaces, such as SQL Server, or IIS. It does not work for Desktop Applications such as Visual Studio, Notepad++, or SSMS. Besides, I was still working on a Proof of Concept with Docker. I wanted to represent the current developer machine, not what I have planned months from now.

What I landed on was a series of PowerShell scripts that would perform all the necessary setup. The scripts had to meet the following requirements.

This article will cover the first step, installing IIS as well as setting up the Master Control PowerShell Script.

The master control PowerShell script is very simple. It sets the location of the execution to a folder containing all the child scripts and then runs each child script. I called the script "BootstrapDeveloperMachine.ps1." Starting out it looks like this:

Through my interwebs research, I came across a little-known feature, at least to most everyone I've talked to didn't know about it, built into Windows 8 and above-called DISM. DISM stands for Deployment Image Servicing and Management. It allows you to install Windows features found in the "Programs and Features" application in the control panel. As an bonus it also provides a series of PowerShell cmdlets.

To see a list of features available on your machine run this script as an Administrator in PowerShell.

Here is the result of running that on my machine. 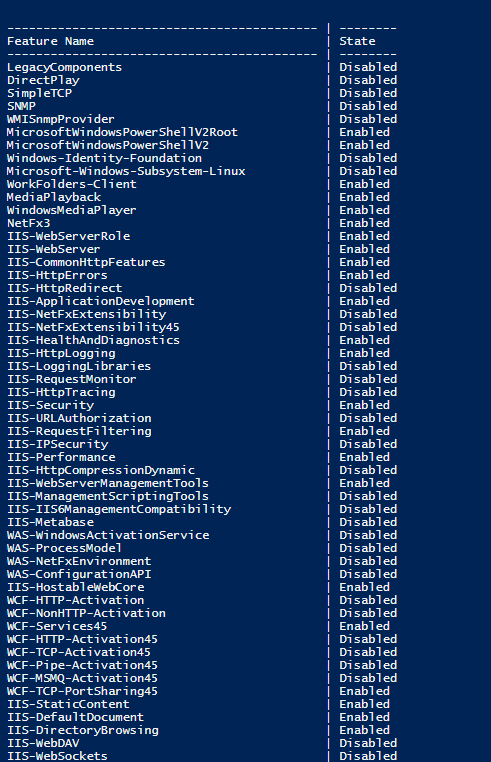 Another nice feature is when you install a package like IIS-ASPNET45 it will go ahead and install all the dependencies.

To install a feature, you just have to run a script similar to this:

In keeping with the smaller scripts responsible for a specific aspect I created a small PowerShell Script called Install_IIS.ps1. That script looked something like this. Please note, these are the features my team needed to do local IIS development, I highly recommend you go through the list provided by DISM's Get-Features functionality and which ones you need.

We ran into a unique issue where we needed to install .NET 3.5 to support some legacy applications. However, our corporate update policy kept blocking the dang thing through DISM. You will notice all those DISM installers are using /Online. You can also mount an ISO image and pull the update from that. The script below will mount the ISO in Windows 10, find the drive you just mounted, install .NET 3.5 from it and then eject the image.

I added a call to that script in the "BootstrapDeveloperMachine.ps1." So now it looks like this:

This is just Part I of the series. So far so good, we have the master control script and the first child script. If you created this script and gave them to a developer they would have IIS configured with all the required features. The developer doesn't have to read any step-by-step guide or worry about clicking on the right check-boxes when adding IIS to their computer. All they need to do is run a PowerShell script as an administrator. The total run time on my computer was around 5 minutes.

Next up is installing the developer tool suite.